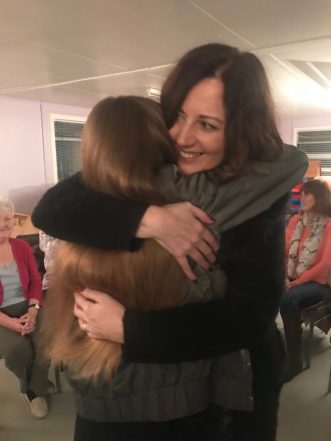 There are many different types of meditation, one I don’t teach very often but which I really love to practice is called ‘hugging meditation’. It was invented by Thich Nhat Hanh (Thay).  When he first came to the West from Vietnam he was a bit taken aback (being a monastic!) when people hugged him, they didn’t do that to monastics in his home country.  But he noticed something interesting.  He noticed that that when we hug each other it is meant as a meaningful gesture but somehow (maybe because we’re not so mindful!) it was at the same time not very meaningful.  We embrace the person, maybe pat them on the back and it takes about 2 seconds… not even enough time for one breath! So he invented this practice as way for people to say goodbye to a loved one and to really acknowledge that they are there, embracing you, with you, for that precious moment.

Face the person you are going to hug. Both of you place your hands together in the lotus/prayer position at your heart centre and each of you bow to the other to recognise that you are there together.  This is a deep practice.

We then may release the other person and bow to each other to show our thanks.

Join palms once again and bow once again to recognise each others presence, to say thanks for being there and for the hug and to remember the moment.

And that’s it! How much nicer and more special that is than a quick touch and go!

Thay writes: “When we hug, our hearts connect and we know that we are not separate beings. Hugging with mindfulness and concentration can bring reconciliation, healing, understanding, and much happiness. The practice of mindful hugging has helped so many to reconcile with each other- fathers and sons, mothers and daughters, friends and friends, and so many others…

We do not need to wait until one of us is ready to depart for a trip, we may hug right now and receive the warmth and stability of our friend in the present moment. Hugging can be a deep practice of reconciliation. During the silent hugging, the message can come out very clear: “Darling, you are precious to me. I am sorry I have not been mindful and considerate. I have made mistakes. Allow me to begin anew. I Promise.”

Let me know how you get on with this practice.

I taught it last week to a group of 20 women in Belfast. They all enjoyed it and said it was ‘lovely’  it does engender nice feelings!

Pictured above is the lovely Gillian with her angel of a daughter Jorja who have been practising mindfulness together for a few weeks and found to be really beneficial, Gillian for her daily busy life and Jorja for school and exam stress!

Nirvana is a concept often misunderstood in the West. The image that initially pops into our head after the 90s pop-group is a paradise or a place with unlimited otherworldly pleasures; but the real  meaning of nirvana is far from that.

Nirvana is at the centre of Eastern philosophy and the main goal of Hindu and Buddhist traditions. In a nutshell, it means liberation from suffering which is probably what has confused the interpretation of a hedonistic heaven. However, Thought Co. points out that nirvana is not actually a place at the end of a dark tunnel, but a state of existence that one reaches. It is a process that one must begin, Thich Nhat Hanh defines it as ‘cooling of the flames’.  The path to nirvana is reached through meditation.

The power of meditation in realising Nirvana

Reaching nirvana is not a walk in the park and even long-term practitioners of ancient teachings have yet to master it. However, the steps to prepare for it can be done by anyone who is open to the idea of a heightened sense of awareness and peace. It’s quiet simple, one must practice these things: daily meditation or prayer, mindfulness, non-attachment, and physical exercise.

In some yoga classes, the instructor will dedicate a few minutes to chant ‘om shanti, shanti, shanti’. Usually translated as ‘peace, peace, peace’, a beautiful short mantra that denotes peace of the mind, speech, and body. When we practice mindfulness mediation we aim to focus on our breath, as was previously explained on Immeasurable Minds. Specific breathing exercises are called pranayama in yoga, and are wonderful tool for letting go of tension, be it in the physical body or in the mind. Developing breath awareness goes hand in hand with mindfulness. To be mindful is to pay careful attention to what is happening in your body,  mind, and  surroundings, mindful breathing anchors your attention to the present moment and enables you to do this.

One thing that can be confusing to those who are not familiar with Eastern teachings is the concept of non-attachment. UPLIFT explains that non-attachment does not mean that we stop caring about others or ourselves, but means we let go of the outcome – or  our ‘obsession with results’. To practice non-attachment, we aren’t motivated by how an action can serve us, but how we can use those actions to serve others— it’s easier said than done, but worth the effort.

Lastly, taking care of the physical body is important to achieving nirvana. All those yoga classes actually serve a purpose outside of sculpting muscles or improving flexibility. Yoga is mediation in motion.  Its a form of mindful movement which actually makes it easier to mediate, especially if you have a busy mind.

Throughout history, we have seen a lot of interpretations of nirvana especially in the West. The media, in particular, has done a lot to promote the benefits of meditation and yoga. Such is the growing interest in mindful practices that one of the leading modern platforms where you can find these concepts is the gaming industry. Modern Mindfulness author Rohan Gunatillake listed a couple of mainstream video games such as GTA V, The Witcher 3: Wild Hunt, and The Witness, that showcase meditative practices. Some, like The Witness, may not explicitly mention these practices, but ultimately the games do illustrate some of the techniques that you need to reach a heightened sense of consciousness. Even non-traditional gaming platforms have targeted mindful practitioners. Digital provider Slingo has several games that focus on mindfulness including Nirvana and Geisha’s Garden. These two games both tap into the imagery that symbolise Eastern practices and meditation. Games such as these help introduce concepts like nirvana to a wider audience, and offer an outlet for more people to join the mindfulness community.

The path to nirvana may be long but it is a straight-forward one. Slowly build a meditative practice, apply mindfulness in your daily life, practice non-attachment, and keep your body in shape. Take it step by step to truly understand how it can change your life and other people’s – and you can wear whatever type of deodorant you like along the way. x